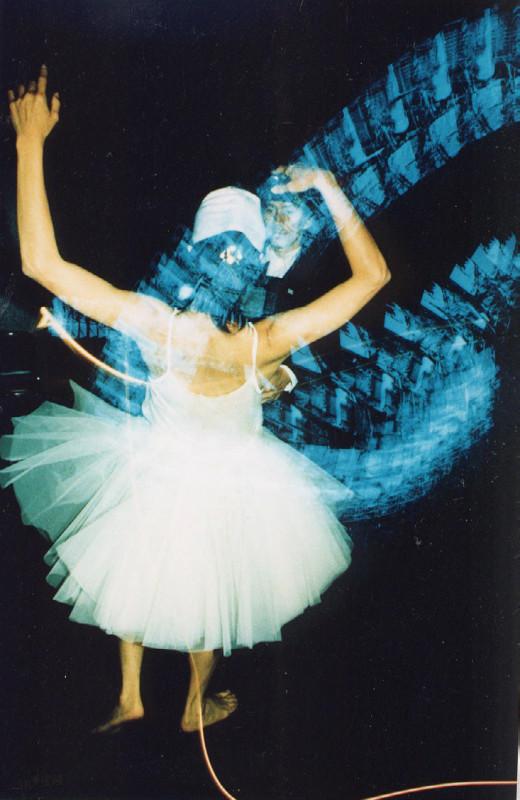 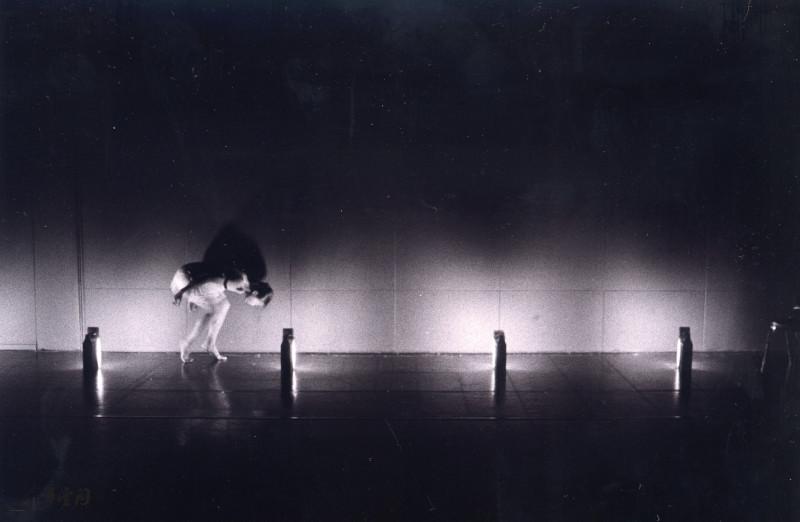 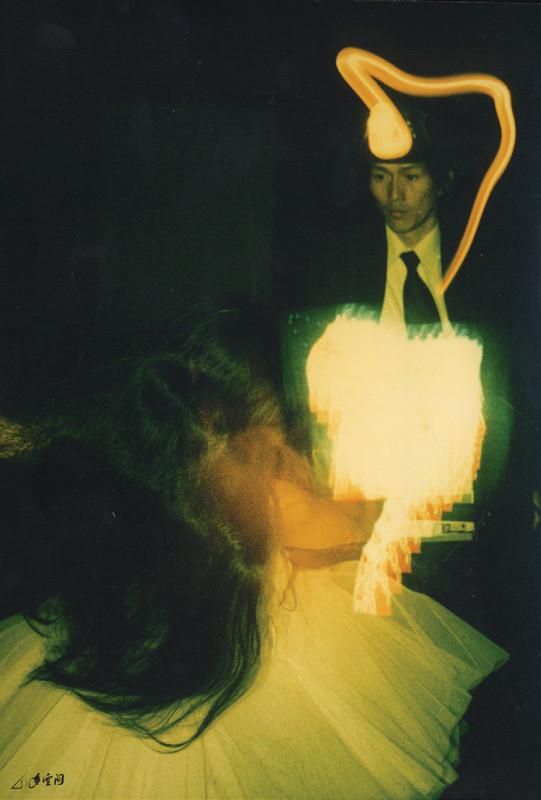 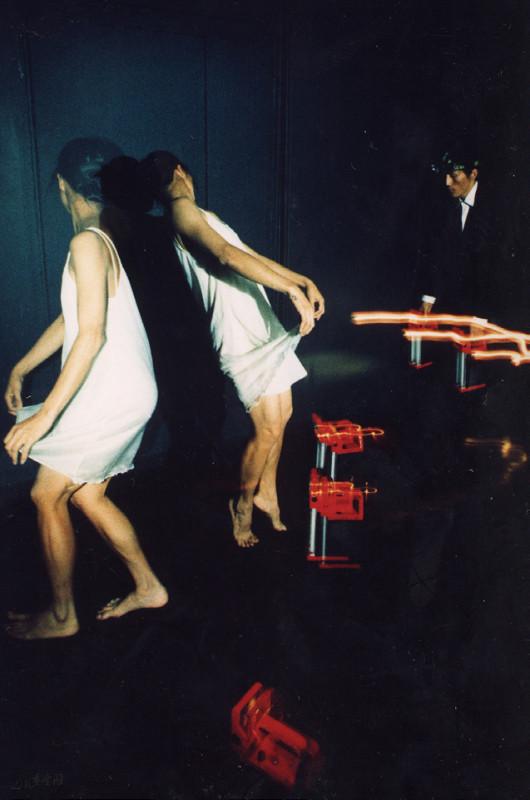 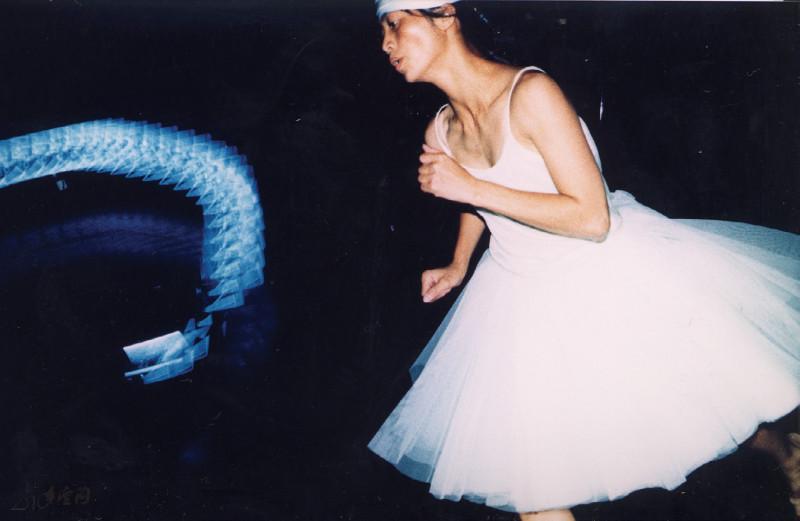 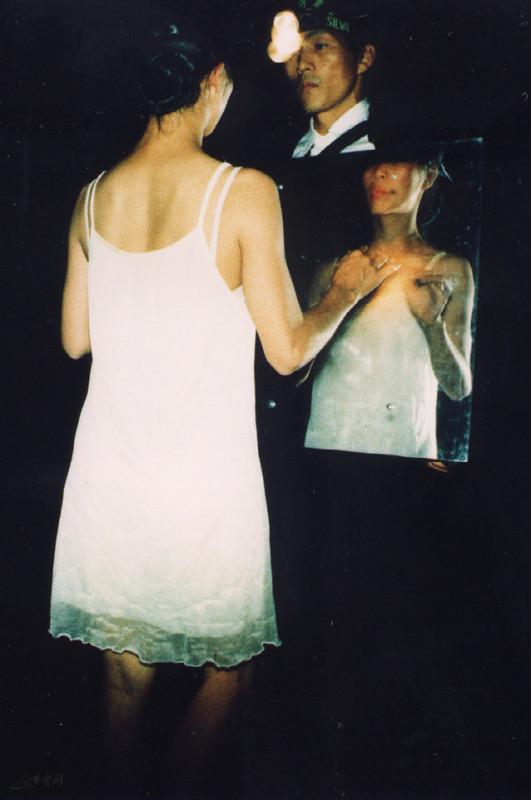 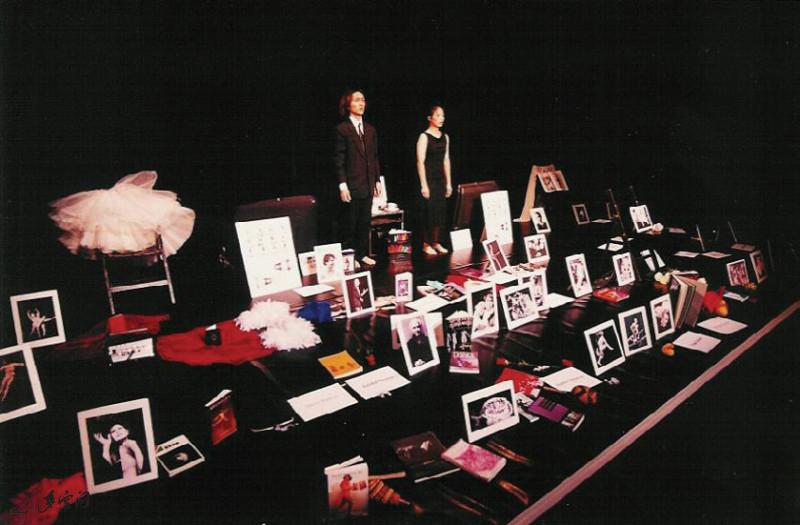 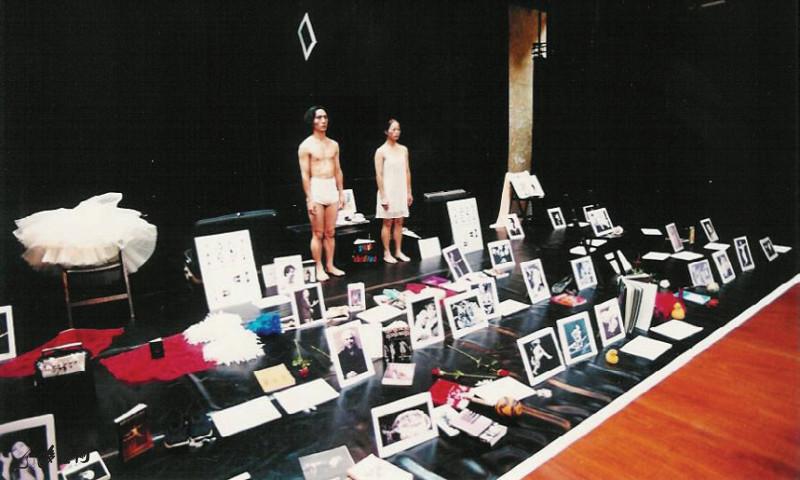 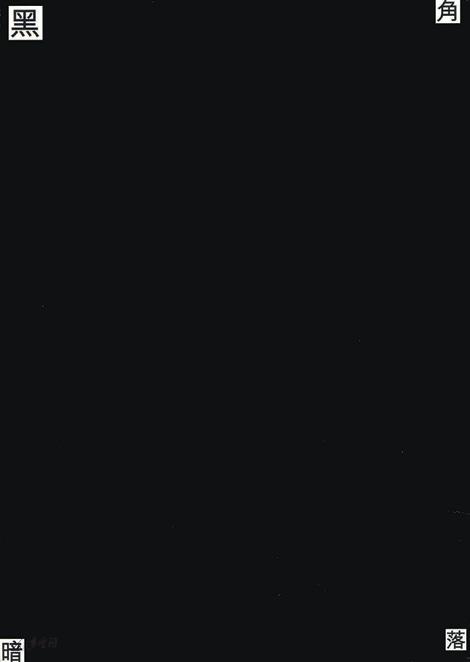 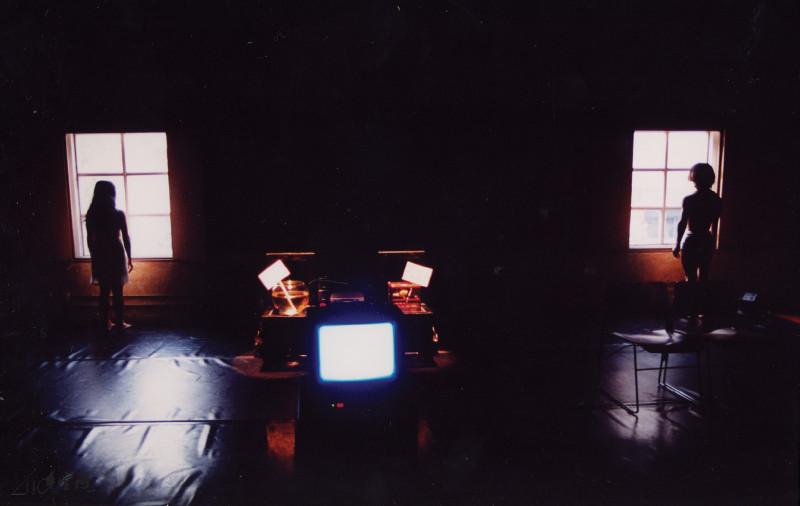 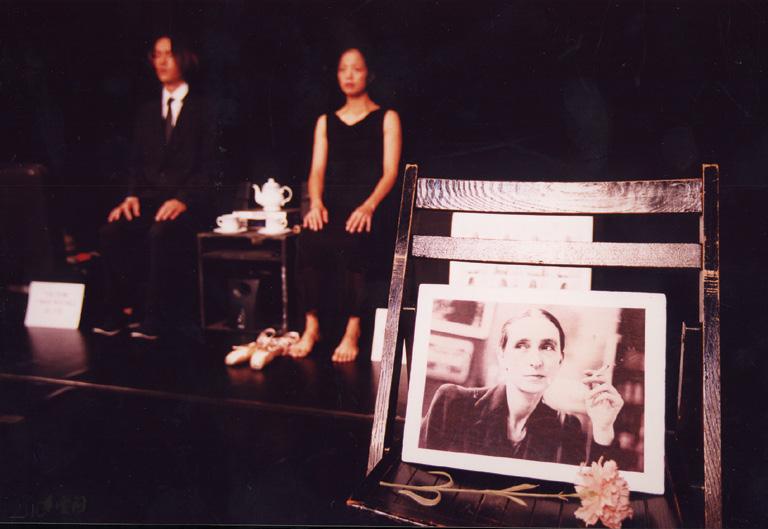 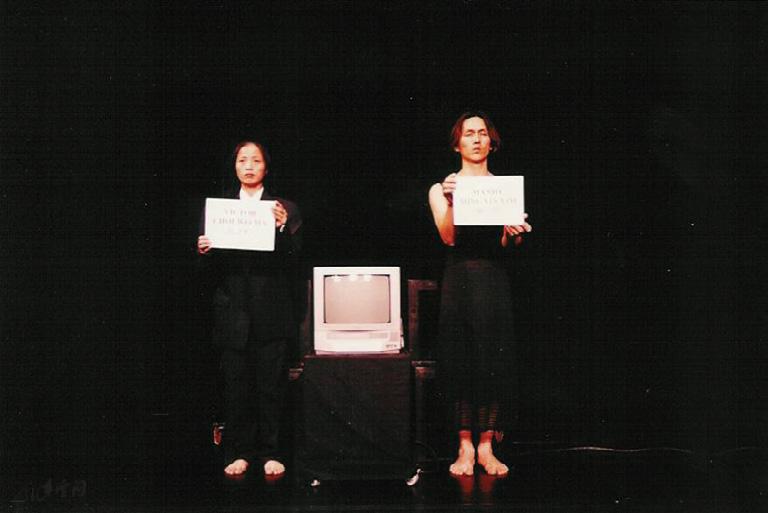 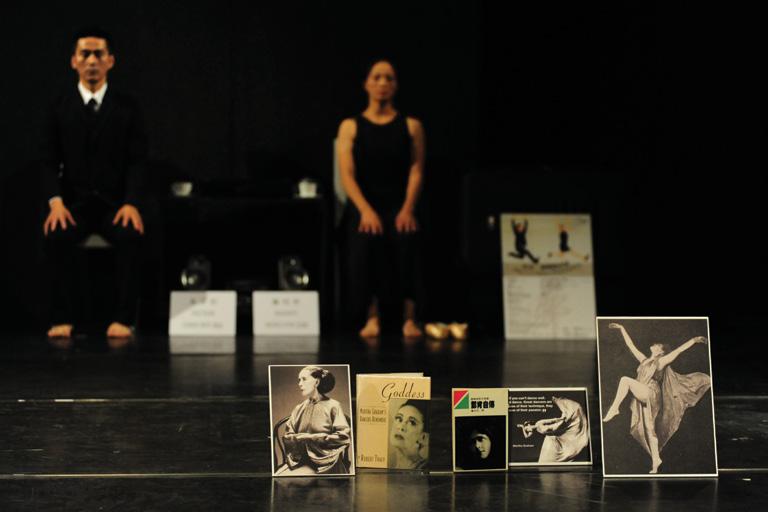 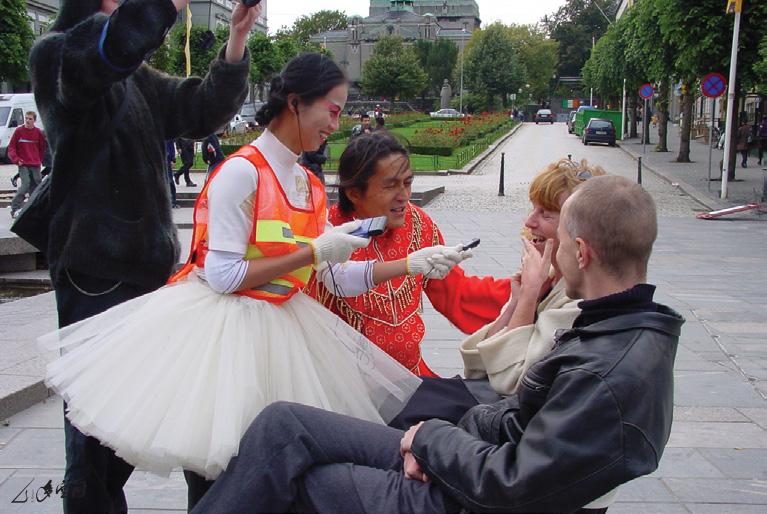 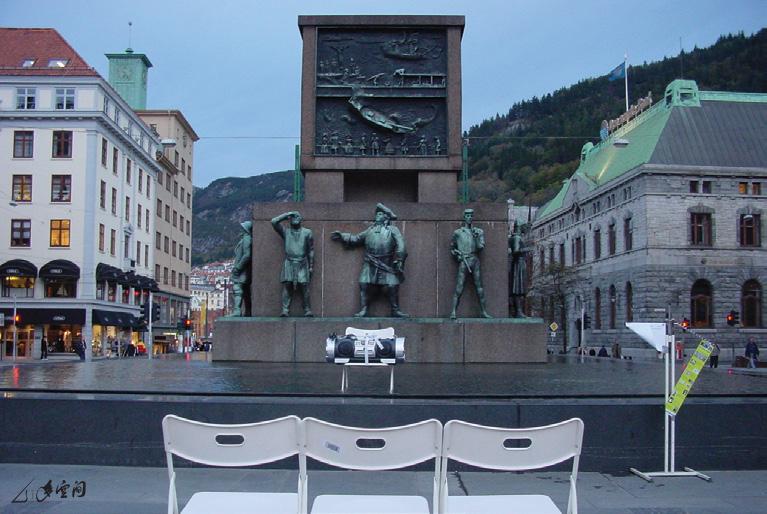 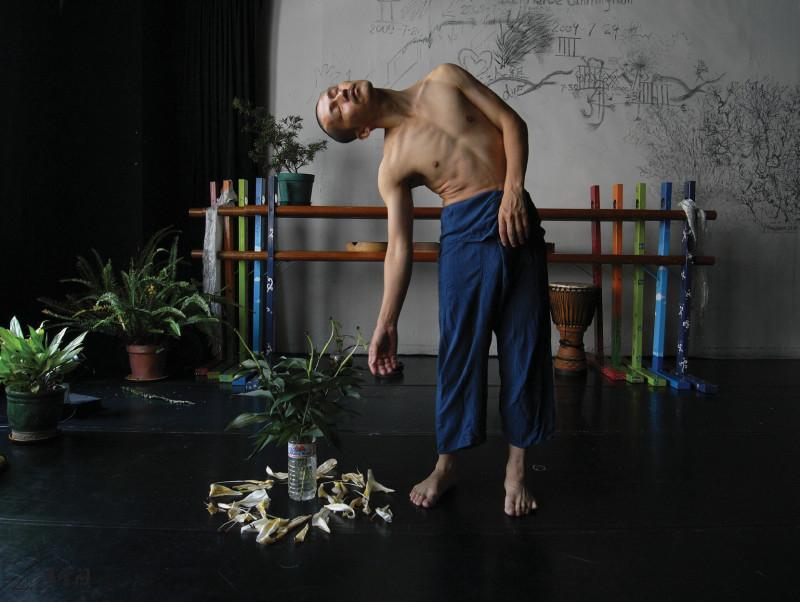 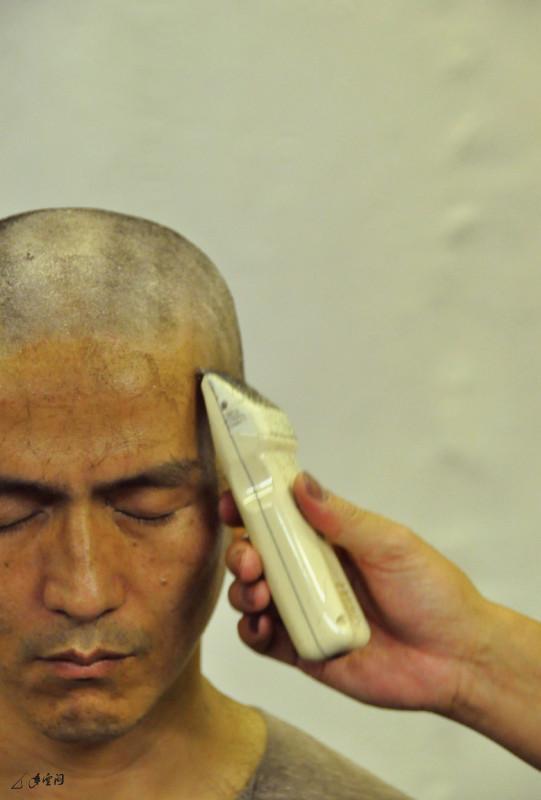 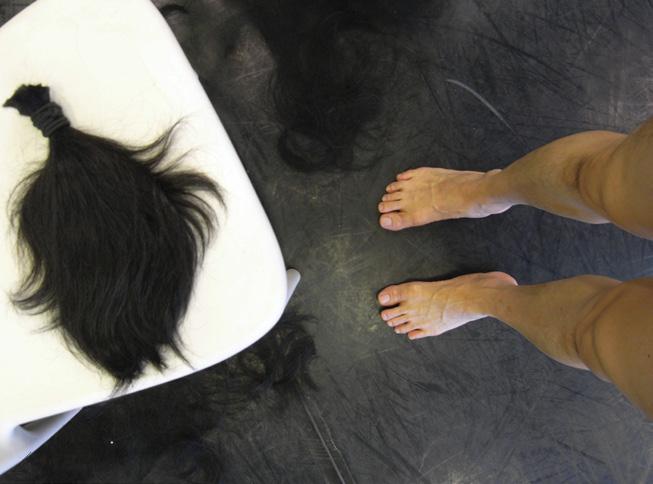 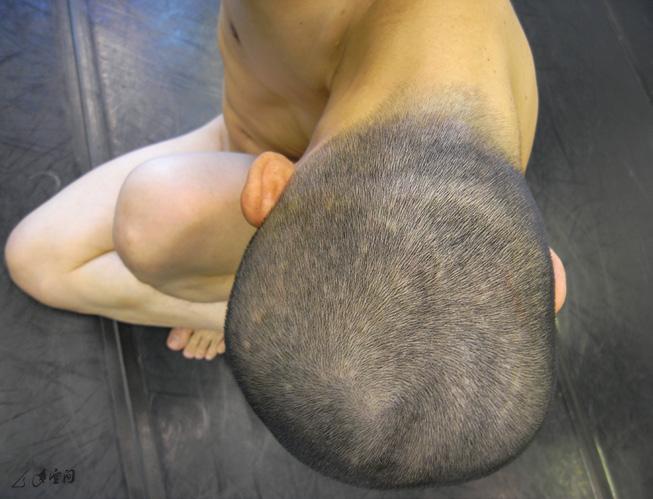 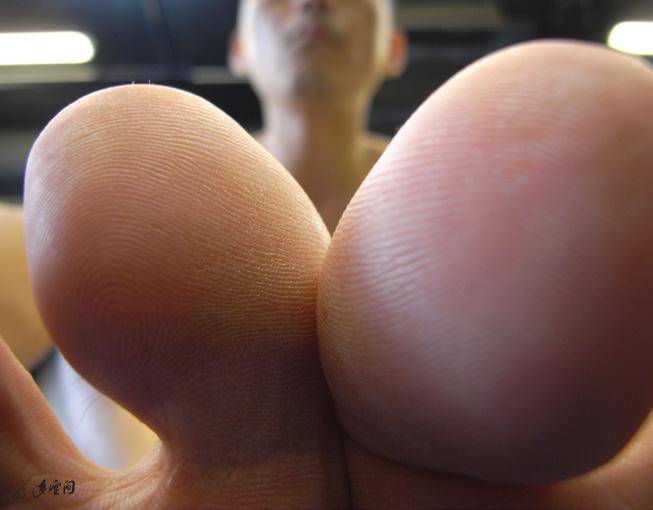 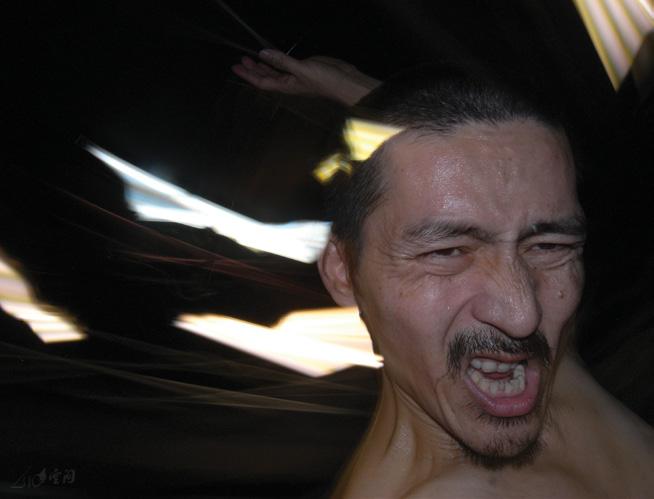 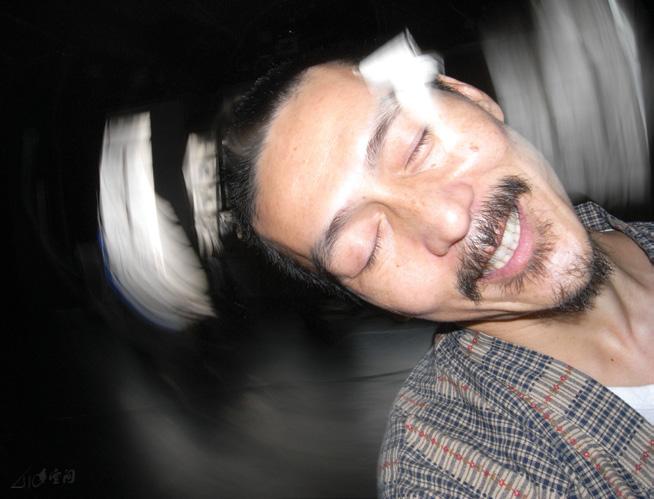 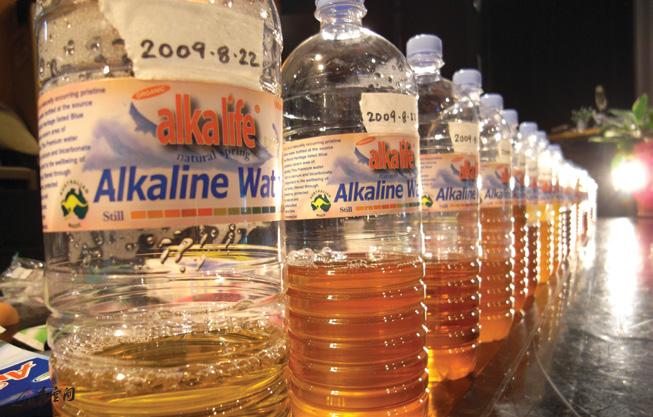 This was an attempt to create a work with the simplest means. With minimal crew and resources, the work pushed the limits of the theatre space, and so stretched the limits of creativity, to find what is “in” the possible from the impossible. Abandoning the theatre’s technical support led to both creative freedom and practical constraints. Many props crept into the work: camping lights, television sets, headlamps and portable PA shared the space with human bodies and voices. The two performers handled all the tasks both on stage and off.

Y-Space dedicated this performance, a 15-minute excerpt, to Aids patients as an encouragement to live with courage.

At the time of making this work, Y-Space’s financial support was cut by the ADC, and Victor and Mandy’s home base was flooded and then reclaimed by the government. The day after their house was demolished, they returned to the theatre, this dark corner, to perform the work. Y-Space was invited to perform the work in Bergen, Norway, the 2000 European Capital of Culture.

The audience was led into near total darkness. The work began with a short dance several minutes long, which was then transformed into other media: a dance felt through the breath, sensed through smells, heard through spoken words, touched through interactions. The sense of space is transformed in the dark – is there even a corner in darkness?

Dance “In” Possible III – This is a Dance Performance!?

While performing Air & Breath I in Norway at the Oktoberdans Festival, Victor and Mandy were invited to perform at a local platform that evening. They decided to talk about dance on stage. They also interviewed Oktoberdans participants and passersby in the streets on their views on dance; these recordings were played back in a public square and the foyer of Bergen International Theatre. This developed into Dance “In” Possible III, and the recordings became part of the work.

The work explored the semiotics of many dance forms, and the “movements” in the viewer’s head rather than the dancer’s body. Styles, forms, ideologies, dance appreciation, dance analysis … does more knowledge take us closer to the thing itself? If we broke these frames of reference, would the dance still reach you? Perhaps a “perfect” performance is simply the one that “you” want to see! The dance returned to the body in the end, searching for the most economical form, to perform the immediacy of the moment.

Dance “In” Possible III – This is a Dance Performance!? II
Shall We Dance!
HK Dance Festival 2010 programme – Fre3 Dance

This is a re-arranged and condensed version of Dance “In”Possible III – This is a Dance Performance!?.

Having danced for many years, the dancer wanted to search for the condition in which dance is performed: that moment without past or future, the moment that the dancer most relished. For this search, Victor Ma enclosed himself for one month, at Y-Space’s studio in the Kwai Chung industrial area. If life and art are so inextricably linked, every moment is a performance, watched by a god, other people, or oneself. The performance was streamed live on the internet for viewing.

The work was a month-long exhibition, including Victor Ma’s Chaozhou physicality, a 45-year-old man’s worries, joys, pains, memories, photographs, and his postmodern self. On the other hand, this was a preparation for a solo later that year, and the enclosure allowed the self to quieten, to enter into the condition for creating. Once every seven days, Victor Ma also set aside one hour to meet and interact with a live audience.